Happy New Year and Happy Anniversary to us!

Today, we were slow to get up. The wind was blowing, it was in the teens, and snow was flying. We could not even see the ski resort, due to the snow and clouds. I woke up not feeling well, so I stayed in bed for a while. 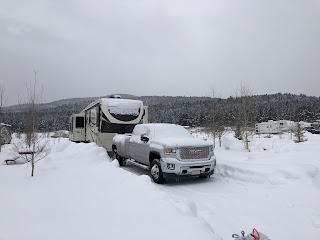 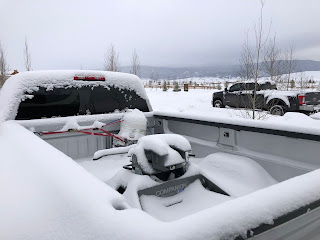 We opted to stay put all day, and didn't do much of anything. We celebrated our 26th wedding anniversary today, but because I wasn't feeling well most of the day, we didn't do anything special today. That didn't matter though, this trip is special enough! We love seeing the snow!

Trying to beat the Snow to Angel Fire

Today we knew we had to get up and get going quickly, because a winter storm warning was in effect for Angel Fire, with snow expected to start around 11AM. We were only 2 hours away from AF, but we knew the last bit through Cimarron Canyon was curvy and often snowy as the elevation increased.

We got ready to go again fairly quickly, but noticed our  Level-Up system was again being fussy about the cold, starting and stopping as we pulled slides in and pulled up the landing gear. It really doesn't like cold weather! Well, I guess I don't work as well when it's that cold either, I think it was 17 degrees! 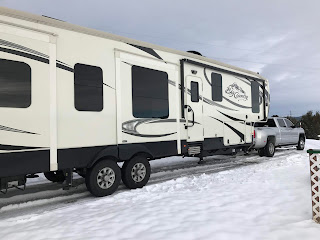 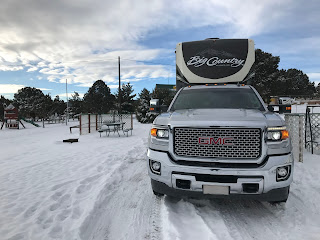 Our site at the Las Vegas KOA

We had to use a little 4x4 action to get out of the RV Park, but then once we got to the highway again, the roads were clear. 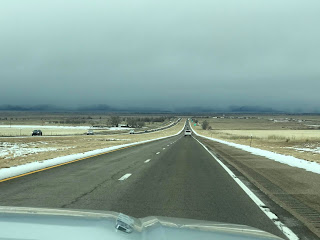 As we approached Springer, NM we could see the mountains off in the distance, and the snow/clouds hanging low to the horizon. We knew we'd probably be encountering some snow along the way!

As we headed through Cimarron, and on to Eagle's Nest, it did start to snow. But luckily not enough to make the roads bad. We got into Angel Fire about 11:00AM. 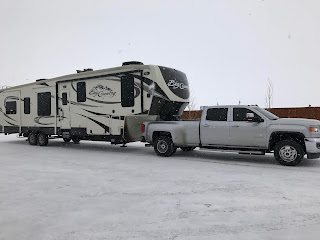 We made it! (Notice the dirt on the front of the rig behind the truck tires -- we need mud flaps!) Tony waited in the truck while I checked us in.


We settled into our spot, and were pleasantly surprised at the number of RVs here. The park was probably 1/2 full! We ate lunch, enjoyed a nap, and then got ready for the evening event -- We had signed up to attend the New Year's Eve Celebration at the RV Park's Clubhouse. It was a prime rib dinner and other fun stuff planned. 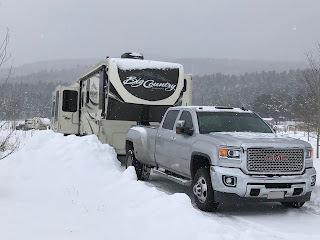 Some snow was already accumulating on the rig and truck by mid afternoon! Note how much snow is piled up by our site -- they have had a lot this year already!

About 6PM we headed over to the clubhouse for the dinner. There was a line to get in and into the serving line, but it wasn't too long a wait. The theme of the "party" was black and white, to celebrate Felix the Cat's 100 year anniversary.

We ended up sharing a table with a family from the Houston area. We had a nice chat with them. (They took our pic!) 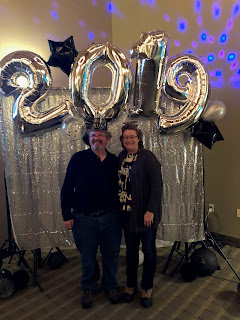 Celebrating the arrival of 2019!

By 9pm, we were ready to head back to the rig. We're not much for partying, and it had been a long journey over the past few days to get here. Happy New Year everyone!

Posted by TravelTiger at 8:58 PM No comments:


Since we got home from Oklahoma about 2AM, it was quite a struggle to get up and get going, but we knew if we wanted to get to Angel Fire in one day, we needed to get moving. Tony did some checks on the truck fluids and tires before we hitched up, while I re-prepped the trailer insides for travel.

We pulled out about 9:30AM, headed again west down I-20. Norman (the truck) did great, pulling Mammoth like it wasn't even there. Tony was impressed with the handling and easy driveability... he could definitely tell a difference in the "newer" technology. 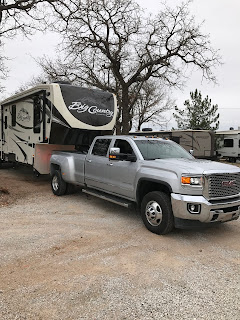 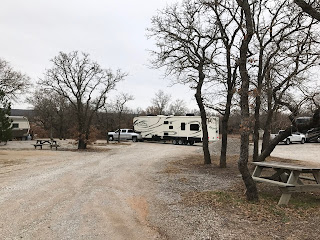 
The only thing that slowed us down was having to stop for fuel. Since we no longer had the large tank, we had to stop to fuel at truck stops, but on this route, it really wasn't too bad.

The drive was very uneventful until the sun was going down, and the temperature started dropping below freezing. New Mexico had recently had a significant snow event in the past few days, and though the roads were pretty clear, there was still some snow on the ground and roads were somewhat wet. 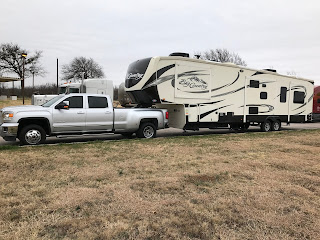 A quick rest along the route


As the sun set, we were getting tired, the temperature was dropping, and we became concerned that the roads may become slick, and/or the water in our rig pipes might start to freeze up -- we hadn't winterized before we hit the road.

About 8:30PM Mountain, we decided it was best to go ahead and look for a place to stop for the night. We were coming into Las Vegas, NM, so we stopped at the Las Vegas KOA. It was a snow-packed road to get to the park, and then also within the park, but we found a spot that would fit us just fine, and pulled in -- we didn't do much of a set-up --  we stayed hooked up and just put out the slides and went to bed.


Posted by TravelTiger at 8:36 PM No comments:

TravelTiger
We are 40-somethings that enjoy our 5th Wheel and traveling, even though we both still work full time. We go as often as we can. This is a record of those travels.